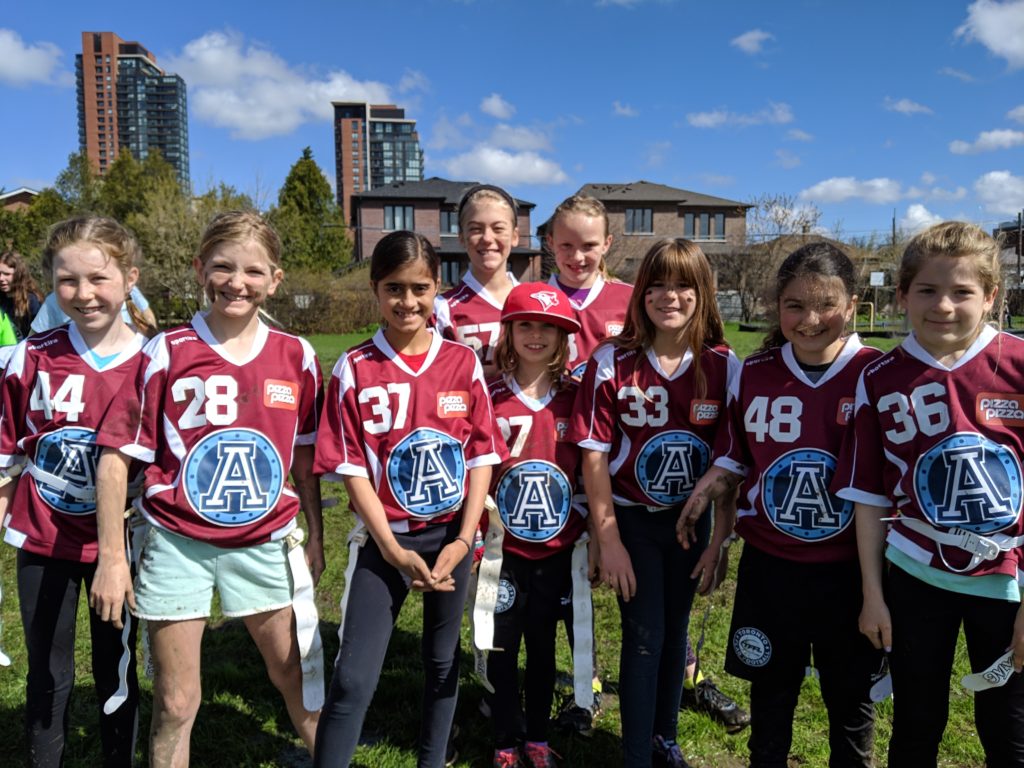 Thank you to all of our players, fans, parents, coaches, and staff for an excellent Spring 2019 season. While we had to battle the weather to start the season, we are thrilled with the weather we got in our last few weeks and your support throughout the season.

Congratulations to all of our players who played with dedication, sportsmanship, and competitiveness on another fantastic year!

A special congratulations to our Spring 2019 Champions!

We are looking forward to seeing each and every one of you back in the Fall!

Get Your Summer Football Fix

Many of you have asked if we run any programs in the Summer.

While we do not run a summer league, Toronto Flag Football is available for special events, including:

If you are interested in having Toronto Flag Football at your event, camp, or would like to take part in one of our skills clinics, send us an email or give us a call!

TFFL Spring 2019 players get 35% OFF tickets for ALL TORONTO ARGONAUTS HOME GAMES for the rest of the season!
To claim this offer, visit www.argonauts.ca/ticket-pass and use code: TFFL2019 or click here. 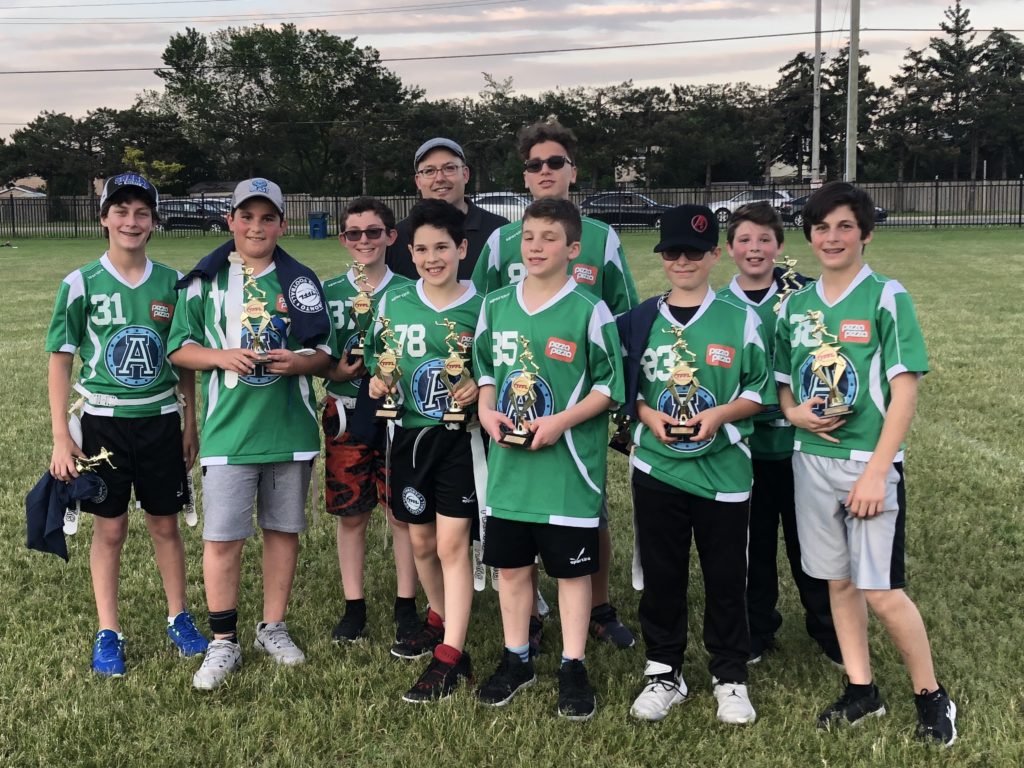 We’re proud to say that the first season of Toronto Flag Football’s JCC Chai division ended with a bang!

Congratulations to the Spartans and the Longhorns on becoming the first ever TFFL North – JCC Chai Champions!

We are certain that there will be more than 2 million people at your championship parades up Bathurst St. this week!

To all of our players, staff, coaches, and families who joined us for the first ever season of Toronto Flag Football in Vaughan… THANK YOU SO MUCH for making this season special! We can’t wait to continue to grow this division and continue to provide the best flag football experience to you that the GTA has to offer!

Playoffs Are This Weekend!

For all of our other Adult and Youth divisions, the playoffs will take place this weekend!

We can’t wait to see who are crowned TFFL champions of Spring 2019!

Please be sure to check the schedule for your exact start times, as some game times had to be altered in order to accommodate the playoff schedule!

We’re looking forward to a fantastic weekend of football fun!

The Toronto Argonauts play their first game of the season this Saturday afternoon, at home at BMO Field. They will host the Hamilton Tiger-Cats in the Battle of the Q.E.W.

To get discounted tickets, visit www.argonauts.ca/ticket-pass and use code: TFFL2019

Former Argonauts Quarterback Ricky Ray will be honoured before the game, and it is also Derel Walker Bobblehead Giveaway Day! 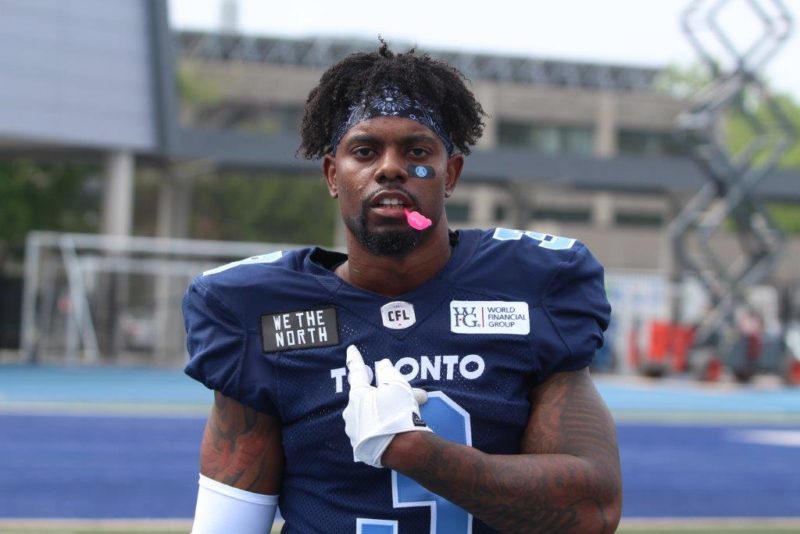 Sorry I am late with the blog! I was too busy celebrating THE FIRST NBA CHAMPIONSHIP EVER FOR THE TORONTO RAPTORS!

We had an awesome Week 5 with great weather from Saturday–Wednesday! We had lots of amazing games and a lot of smiling faces in the second last week before the playoffs for our Saturday and Sunday divisions, and the final week before playoffs for the TFFL North JCC Chai Divisions!

This Sunday is Parents Appreciation Day with pickup games for our parents, refreshments, and a raffle presented by Lululemon Yonge & Briar Hill!

The Playoff Schedule will be posted early next week and all teams will be informed of their first game times!

Looking forward to another amazing weekend!

Don’t forget to redeem your two-for-one tickets to the Toronto Argonauts home opener vs. the Hamilton Tiger-Cats on June 22. If you have any questions about it, don’t hesitate to reach out. 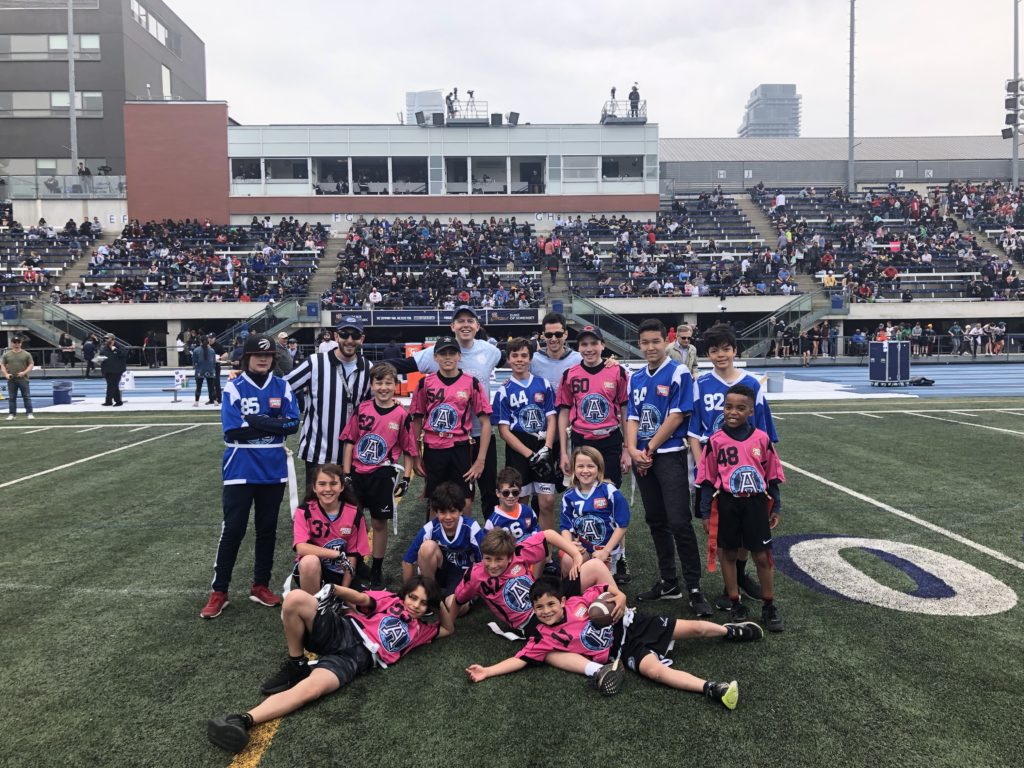 What an exciting week of football we had this weekend!

Finally…we were back outdoors on Sunday at Fieldstone and Northview Secondary School for our youth leagues, and both our Adult divisions and our NFL division had jam packed weekends making up for postponed games.

Let’s all hope that the weather holds out for our JCC Chai players, who have regularly scheduled games on Tuesday, and makeup games on Wednesday at Westmount Collegiate Institute.

ON THE FIELD WITH THE ARGONAUTS

On Thursday, some of our TFFL players had the opportunity to take in some CFL action, as the Montreal Alouettes visited Toronto for the first game of the pre-season.

At halftime, our TFFL players had the opportunity to play a mini-game in front of nearly 5000 fans!

We even got a visit from Friend of the League, James Wilder Jr., who was kind enough to pump up the players before they hit the field!

Bonus: The Argonauts won the game, and look great heading into their next pre-season game.

GAME OF THE WEEK

This week’s Game of The Week comes from our “Lower Girls” division, where the Pandas defeated the Marauders in a well contested game.

The game opened with Hannah A. returning the opening kickoff for a touchdown to give the Pandas a 7-0 lead.

Touchdowns from Hannah A. to Leah C., and Josie M. to Beatrice L. gave the Pandas a 21-0 lead, but the determined Marauders tried to claw back before the half.

Roxy W. found Maddie G. near the end of the half to cut the lead to 21-7 and giving new life to the Marauders going into the second half.

However, in the second half both teams played tight, outstanding defence, leading to a scoreless finish, and a game that ended 21-7 for the Pandas.

The Marauders, however, kept their eyes on the real prize… enjoying Timbits with their coaches following the game.

“To excel at flag football, you only have to remember the five F’s,” said Marauder’s coach Amy T., “Football. Flags. Fun. Friendship…and Food.”

PLAYER OF THE WEEK

At the TFFL, we try to spread the love around to all of our age groups, teams, and divisions. It would usually take something really special for two players from the same team to be named Player of the Week in the same season.

I think we can all agree that this catch is something special.