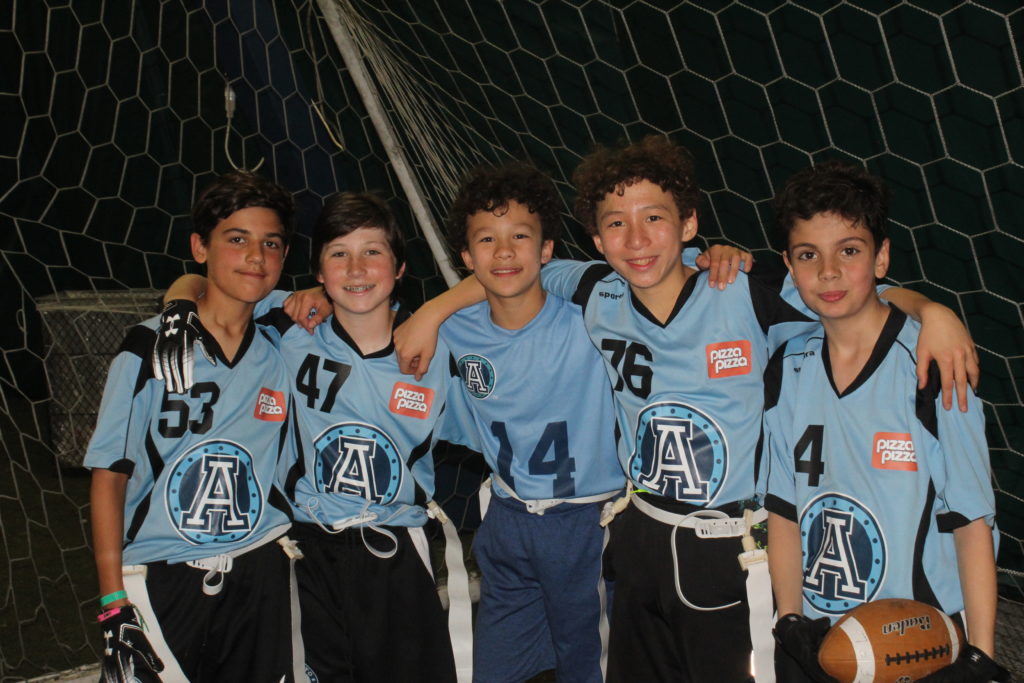 This week was another difficult one for field conditions across the city.

Our Saturday games progressed as usual at North York Civic Soccer Fields, but the storms over the weekend led to Fieldstone’s games being moved at the last minute to the Downsview Park Soccer Dome.

All of our Sunday games were played with some fantastic finishes and lots of fun for all!

We didn’t have quite the same luck trying to move our Tuesday night JCC Chai division after the permits were canceled, but we will make up all JCC Chai missed games with sessions on Wednesdays June 5 and June 12 at Westmount Collegiate Institute.

Thank you to all of our players and families for being so understanding about some of the last minute changes this season.

Let’s all hope the weather holds out for the rest of the season!

Now on to football…

GAME OF THE WEEK

The first half saw the 49ers open up a 14-0 lead early thanks to touchdowns by Zachary S. and Hamish E.

The Niners and Ravens then exchanged touchdowns, before Ravens’ QB Brett A. found Damon K. in the end zone for a 10-yard strike on the last play of the first half, cutting the halftime lead to 21-14.

Both defences stood tall in the second half, and the Niners took a 28-21 lead into the final five plays.

The Ravens were looking for magic—and they got it, thanks to another Brett A. touchdown, this time on the receiving end of a pass from Hudson D.

The Ravens could have elected to end the game tied at 28, but chose to try a two-point conversion to win the game. However, fantastic defence from the 49ers thwarted the Ravens’ two-point attempt, and ended their comeback hopes.

You can’t help but notice many parallels between this game and the 2013 Super Bowl!

But this time… It was the 49ers who got the last laugh!

PLAYER OF THE WEEK

This week’s Player of the Week is David K. of the Rams!

David threw four touchdowns this weekend across two games, both of which were Rams victories!

By the end of the season, there is no doubt that we’ll be thinking of David as one of the greatest players to ever wear the Rams uniform.

SECRET MISSION: ARE YOU A WINNER?

We had no teams approach us on Sunday to try to claim their Secret Mission reward.

Do you think your team earned the Secret Mission prize?

Contact us by email or on Instagram with your team name, and we’ll check to see if your team earned the prize!

Don’t forget to order your TFFL Sportscard by May 31!

Click Here To Create Your SportsCard!
Back to TFFL Blog 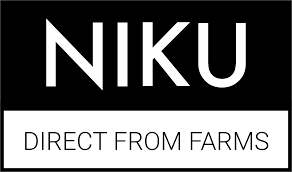 NIKU Farms is an online farmers market that delivers ethically raised meat right to your door. Treat yourself to curated packages of pasture raised meat directly from local Ontario farms. With Spring and BBQ right around the corner, this is the time to indulge in high quality and healthy meat for you and your family.

Your deliveries will arrive in an insulated box, so there is no need to be home when it arrives. It will be shipped directly from a local Ontario farm, so you know exactly where the meat comes from and how the animals were raised. You can pause, skip or cancel anytime.

NIKU Farms started out with the mission that they still carry today: to change a broken system that harms farmers, animals, the environment, and the health of consumers. NIKU was built to make this change convenient and straightforward for you. They simplify the process by hand-picking the best farms that raise animals the right way, so you can make sound purchases that are better for the environment, and for your family. Together with their partner farms, they’re on a mission to provide everyone in our community with easy access to high quality, healthy and responsibly raised food.

For a limited time, they are offering everyone at TFFL $45 off your first subscription box OR $30 off a one-time package. The benefit of subscription is that you can free shipping, and you can pause, skip or cancel anytime.

**Use code TFFL to take advantage of this opportunity!** 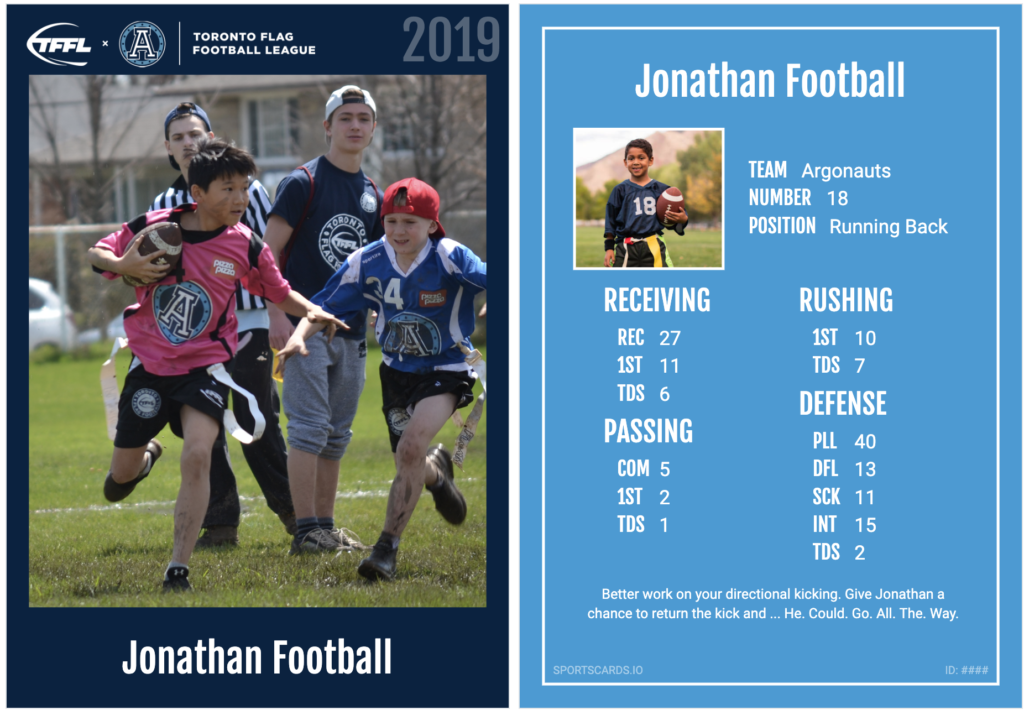 Once again, the Toronto Flag Football League is excited to partner with Sportscards.io to offer one free card to each player!

Additional cards are available for purchase and make great gifts to friends and family!

The deadline to create your TFFL Sportscard is on May 31.

If you have any trouble with your order you can contact Sportscards.io support at: tffl@sportscards.io 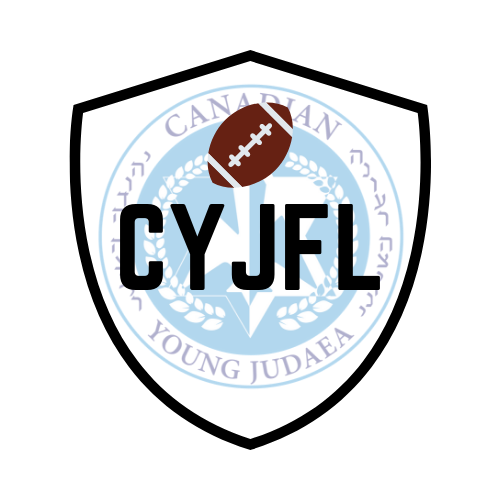 While the TFFL season was on hiatus for the Victoria Day Weekend, Canadian Young Judaea invited our referees to officiate that their CYJFL charity football tournament!

The tournament was fantastic, the weather held off, and there was even a hot dog lunch!

Thanks for having us CYJ! We can’t wait to work with you again in the future.

If you or your school, camp, or organization are interested in hosting a flag football tournament, don’t hesitate to get in touch with us for our expertise and assistance with providing referees, booking space, and scheduling the event! 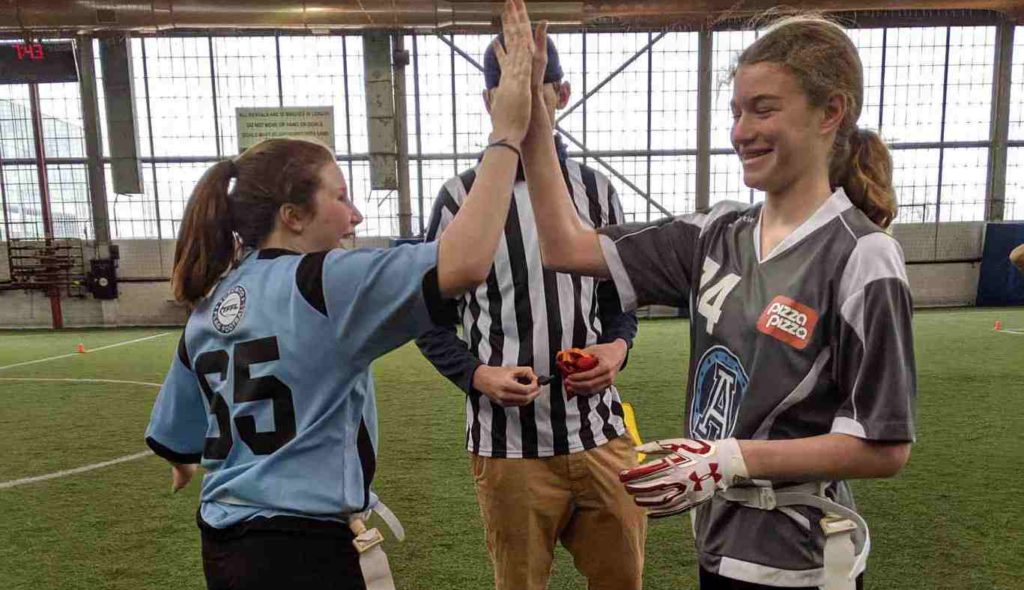 Week Two of Spring 2019 came and went, and unfortunately, the week passed with all of our outdoor games cancelled/postponed.

Fortunately, we were able to secure some indoor space at Downsview Park to allow our Sunday teams the opportunity to play flag football this weekend!

We apologize to all of our Saturday and Tuesday players, and will do our best to reschedule the games!

Going forward – let’s all cross our fingers for some sunshine and warm weather so that we can be back at Fieldstone, North York Civic Fields, Northview Secondary School, and Woodvalley Field after the long weekend!

Player of The Week

This week’s TFFL Player of the Week is Nathan L. of the Cardinals!

Nathan did his best Kyler Murray impression, by throwing for 112 yards and 4 touchdowns, and added 6 flag pulls on defence in his team’s victory over the Giants.

Our partners at the Toronto Argonauts have another special ticket offer for TFFL families for the home opener on June 22 against the Hamilton Tiger-Cats.

To purchase additional tickets at a discounted rate, click here: http://www.argonauts.ca/ticket-pass and use the promo code: TFFL2019. 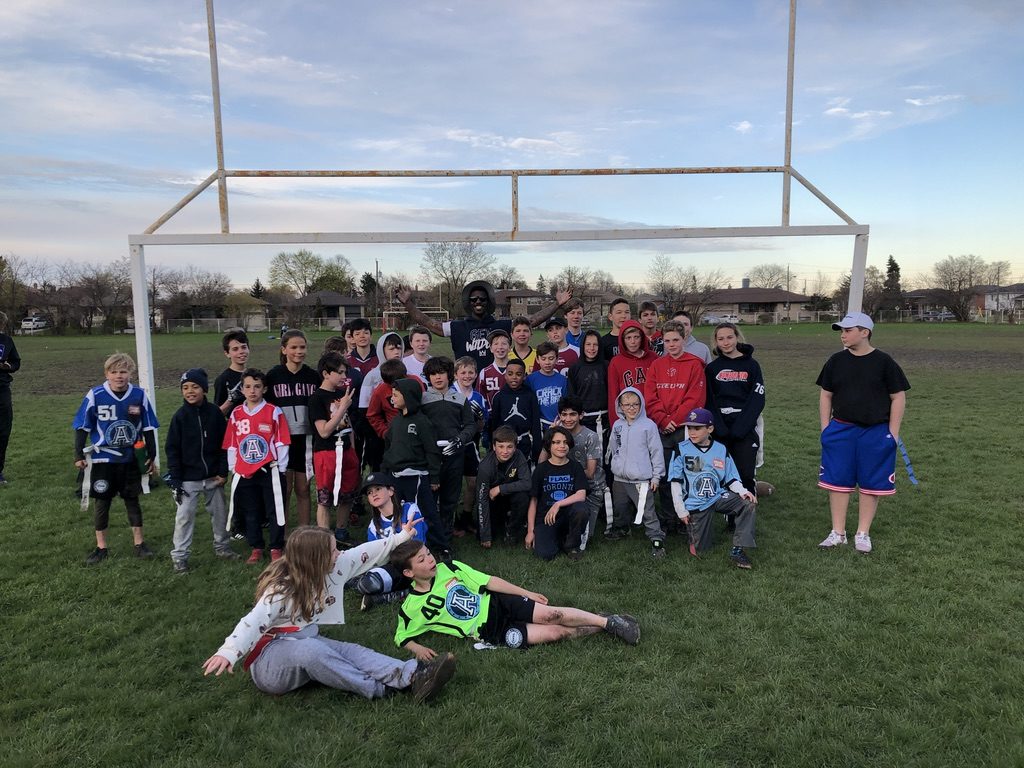 Wilder, who won the Grey Cup and Rookie of the Year in 2017 with the Argonauts, led the session with the help of our TFFL Staff Team.

The participants participated in exciting drills that taught passing, catching, flag pulling, rushing, and defence, which they will be sure to show off on the field on Sundays and Tuesdays!

The evening culminated in the final drill, called 1v1’s, where two champions were crowned and surprised with tickets and field passes to the Argonauts home opener on June 22 vs. the Hamilton Tiger-Cats.

Thank you James for an exciting evening! We are excited to work with you again in the future! 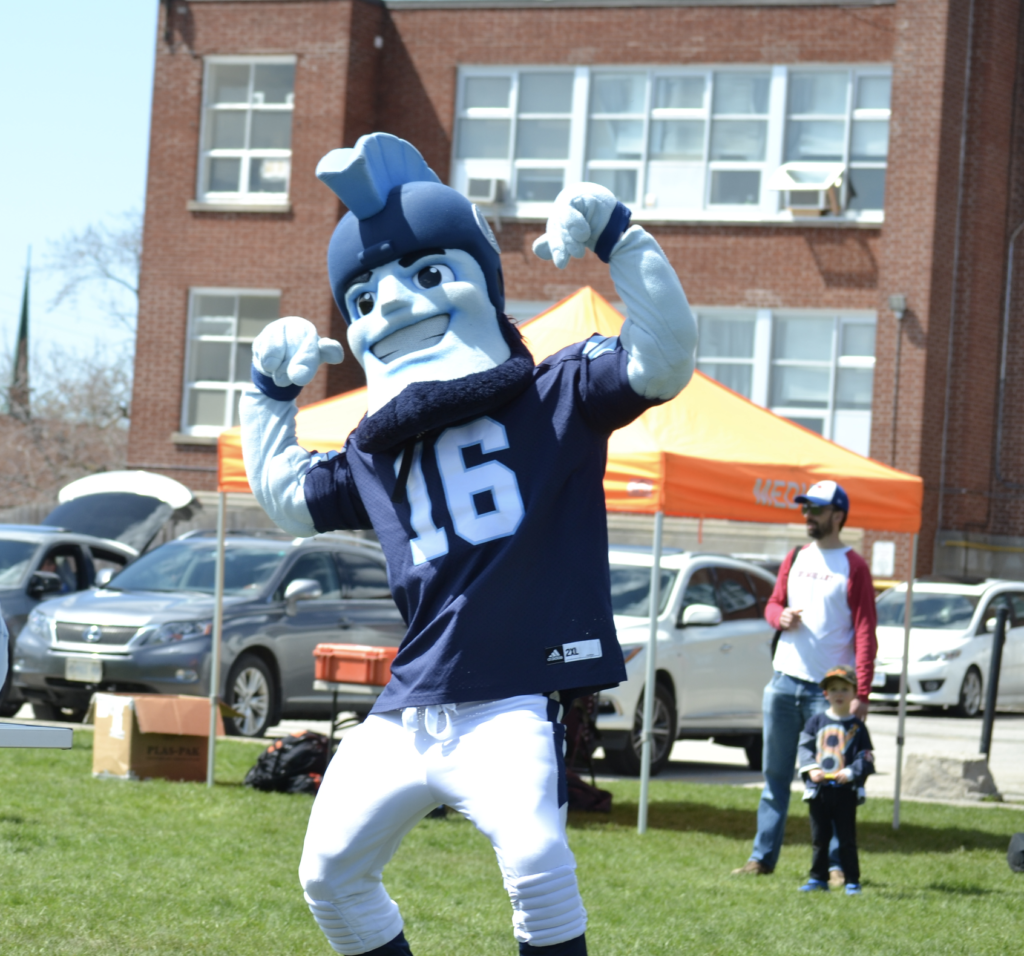 Welcome back for another amazing season of Toronto Flag Football League action!

We’ve already had two jam-packed days of football for all of our North York teams, and are anxiously awaiting Tuesday’s start of our TFFL North – JCC Chai division.

For all Week 1 box scores, check out our schedule page and click into any game for a play-by-play game log and stats.

Our new partners at the Toronto Argonauts came out to the field for this week to organize some games, sign autographs, and share passion for the game of football!

Thank you so much to Jason The Argonaut, Quarterback Brandon Bridge, and Offensive Lineman Jamal Campbell for coming out to support all of our players!

The Argonauts also shared some great footage of TFFL action on their social media page! Check out their amazing video right here:

Player of The Week

This week’s TFFL Player of the Week is Ethan R. of the Ravens!

Ethan had two catches, both for touchdowns, and added a third touchdown on the ground, totalling 76 all purpose yards in his team’s 49-14 win over the Eagles.

Oh… and he did it all with a smile on his face and the support of his teammates! Congratulations, Ethan!

Some More Scenes From Week One